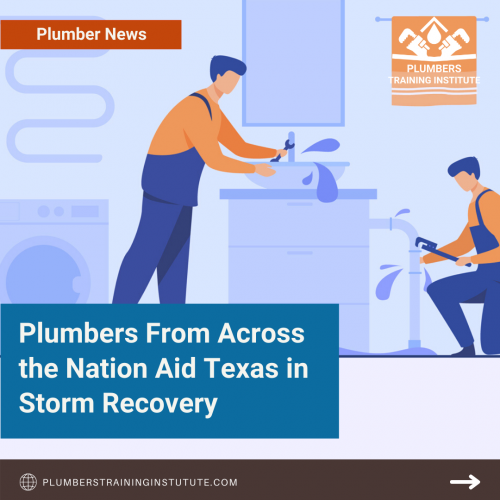 Last week, a major winter storm swept across many parts of the American south. The storm wreaked havoc in many states. But in Texas, it caused an ongoing power outage crisis. After the storm finally passed and temperatures started to rise, many Texans wanted to start recovering and get back to normal. But, as many plumbers know, extended power outages coupled with a quick freeze/thaw cycle brings one thing: burst pipes.

Burst pipes, major leaks, and the many other plumbing related issues that emerged in the wake of the storm have exposed a major statewide workforce shortage. The need for plumbing services has become so overwhelming that Texas Governor Greg Abbott worked with the Texas State Board of Plumbing Examiners (TSBPE) (which the state tried to completely abolish in 2019) to create three temporary regulation changes.

Why Is Texas Struggling To Attract Plumbers?

While these temporary “band aid” measures are in place to get more Texas plumbers working again, many plumbers are arguing that there simply aren’t enough plumbers in Texas to meet demand.

Chris Taylor, a field manager for Radiant Plumbing in Austin, said demand for plumbers has outpaced the number of available technicians. Radiant is currently receiving triple its normal number of calls per day, and the company has over 2,500 customers awaiting service.

“It’s heartbreaking, really. You’ve got a lot of people, thousands of people, that need help, that are desperate,” Taylor said. “And there’s nothing you can do for a lot of them because of the reality there’s not enough people out there to do the work.”

According to The Texas Tribune, factors like the state’s low minimum wage, a lack of cultural respect for “blue collar industries,” and a focus on college being the only path available after high school is keeping “plumbers from moving to Texas and young people from entering the industry.”

During last week’s storm, Gov. Abbott also signed orders allowing out-of-state plumbers to obtain provisional licenses to work in Texas. According to the Washington Post, Frank Denton, the TSBPE chairman, and his agency have been working long hours to accelerate the approval process for non-Texan plumbers.

Out-of-state plumbers can submit an application that requires them to provide their licensing information and insurance coverage that meets Texas state standards. Because the demand is so high, the board has been working to process the applications in less than a day, Denton said.

“We are certainly inviting them to come to Texas. That’s for sure,” he said. “As a result, we’re trying to expedite and make it as seamless as possible.”

Good Samaritans From the East

Once this measure was in place, master plumber Andrew Mitchell, his apprentice (and brother-in-law) Isaiah Pinnock, and both of their respective families drove for 25 hours straight from New Jersey to Texas in order to help those in need.

The story about the brothers-in-law has garnered national attention, making plumbers throughout Texas and across state lines offer to send supplies as they run out. Other people who caught wind of their work through social media have offered financial help.

The generosity from others allows Pinnock and Mitchell to better help families who aren’t able to afford the costly repairs needed to restore some order in their lives, Pinnock said.

“A lot of people who go without water is because of financial reasons,” he said. “Yesterday, we went to a subdivision of very small houses and fixed income, and we could not feel right leaving them without running water.”

Pinnock said he and Mitchell coached “handyman uncles” and family members through repairs at about six homes in that neighborhood, leaving without much in their own pockets.

How You Can Help

If you would like to lend your expertise to the residents (and plumbers) in Texas who need all the help they can get, click here.

If you know anyone who would like to become a licensed plumber or go from a journeyman to a master so they can go to Texas to help, click here then choose your state.

Or, if you’re unable to travel to Texas and help, here’s a list of charities gathered by Texas Monthly that you can support.