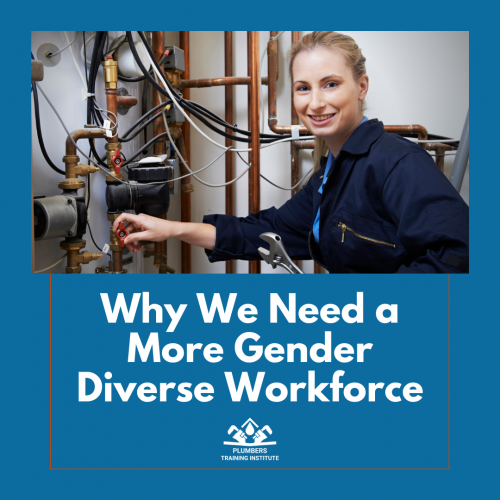 In 2020, the US Bureau of Labor Statistics found that there are about 537,000 licensed plumbers, pipefitters, and steamfitters in the United States. But – only 2.3% of them are women.

Think about that for a second.

To understand why plumbing (and most trades industries) have been consistently male dominated for decades, we decided to see what the women in the industry today are saying.

According to Contractor Mag, two big hurdles that often keep women from pursuing a plumbing career are:

First, we’ll share some stories from female plumbers who have experienced discrimination during their work, so we can acknowledge it and work on reducing gender discrimination/stereotyping. Then, we’ll highlight some women who are working on increasing awareness for plumbing as a viable and rewarding career.

If a woman wants to pursue a plumbing career, there are still many people out there who may not take them seriously or think they’re doing “men’s work.”

“Women wanting to get into the trades need to be prepared for some pushback,” says Linda Hudek, owner and plumber at LH Plumbing Services, LLC in Ohio. “Especially if it’s not at a family-owned company… that’s just the way of life.”

Alayna Chavez of Cool Today in Florida recalled a time where she faced gender discrimination on the job.

“I had one customer who didn’t accept me to do the work of a ‘man’s job’ on his property (setting a toilet). So I gave him what he wanted and let him have another male plumber come out to do the job. Let’s just say my technician stood up for me when the customer wondered how the company could send a woman out to set a heavy toilet and guarantee that it wouldn’t leak. ‘She can install heaters, I’m sure a toilet is nothing to her,’ my technician told this customer.”

Is that type of “pushback” worth it for women who are interested in becoming plumbers? According to Leah Adelman, owner of Leah the Plumber in Saskatoon, Canada—absolutely.

“The plumbing trade is the least picked by women, but I think it’s the most open to receiving women in the trades,” she says. “It’s a profession that’s well paid and you can live a good lifestyle on what you make as a plumber.”

Despite many female plumbers feeling like the profession is worthwhile for women, plumbing has had an “image” problem for many years that has kept it off the radar for many girls thinking about what they want to be when they grow up.

Jayne Vellinga, the Executive Director of Chicago Women in Trades, said one reason there are so few women in the plumbing business is because they never hear about it growing up when ideas about a career are formed.

“Gender stereotyping begins at a very early age,” Vellinga said. “Women don’t know much about the [trade] careers or benefits of the career. It’s just not presented as an option to women, either as students or adult students looking for work.”

Vellinga said hands-on work, for both boys and girls, has been cut out of the school system due to the push for everyone to go to college.

Courtney Wilkinson, vice president of Texas-based Benjamin Franklin Plumbing said “she was lucky” because her dad, the business’s founder, encouraged her to learn about all aspects of the business and plumbing industry as a whole.

But Wilkinson recognizes that not every girl gets an upbringing like hers. That’s why she, and many others, are working on bringing plumbing to more girls at an earlier age.

Once it’s safe to do so again, Wilkinson’s company wants to visit local high schools to help educate students on trades careers.

“Just educating is what we’re trying to do. So once things open back up and they start allowing visitors back in schools, we can get rolling with that again,” Wilkinson says. “For years we couldn’t get into high schools at all to talk about our trade. So if we couldn’t even do that, what are the chances of getting a female into this industry? It’s slim to none.”

Other larger organizations like the National Center For Women’s Equity In Apprenticeship And Employment have created helpful resources, like this guide for apprenticeship outreach, to increase interest in the trades among women.

Another effective method for bringing more women into the plumbing world is word of mouth. Laura Ceja, the Special Representative for Training and Outreach at the United Association of Plumbers, Fitters, Welders, & Service Techs said women have to “take the lead and encourage other women to become plumbers and change the way the world sees our profession.”

“Now, more and more, I hear women tell me stories of other women they met in the industry or a strong female role model in their life that changed the way they saw plumbing and encouraged them to become plumbers.”

Benjamin Franklin Plumbing has also picked up on this word of mouth encouragement method.

“Word-of-mouth has been our best recruiting method for women so far,” said Wilkinson. “I think as an industry we need to change and put in the effort — when we’re advertising for a technician or just spotlighting our female techs. I think that’s one of the best ways to approach this.”

Picture: Men vs Women graphic over the years

While the number of women in plumbing has risen over the years (but not by much), the industry still has a long way to go to achieve a more balanced workforce. That’s why we encourage you to participate in the simple yet effective “word of mouth method!” Whether you’re a man or woman, encourage your daughters, nieces, or even granddaughters to consider working in the rewarding industry that you’ve called your own for many years. With your help, there’s hope that we can increase the 2.3% to a much larger number by the time the next census comes.