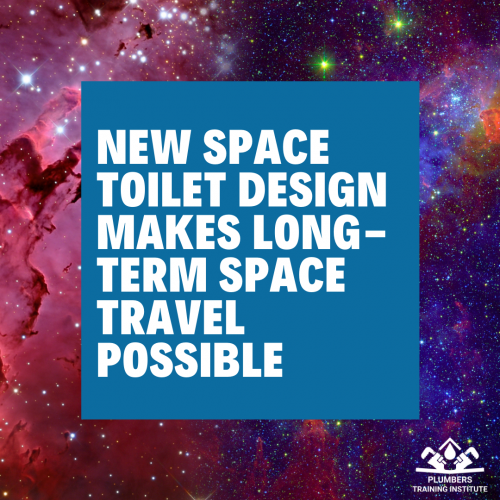 Back in June, we wrote about the increased demand for more eco-friendly and efficient “low-flow” toilets, and the potential plumbing challenges they can bring.

While low-flow toilets mainly rely on gravity to help use less water, imagine designing or installing an ultra-efficient toilet where there’s no gravity. That’s exactly what NASA engineers figured out for their astronauts with the new Universal Waste Management System (UWMS).

During a recent resupply trip to the International Space Station (ISS), astronauts installed the UMWS in order to measure how well it “recycles” liquids for long-term space travel. Yes, that means all liquids.

“We recycle about 90% of all water-based liquids on the space station, including urine and sweat,” explains NASA astronaut Jessica Meir. “What we try to do aboard the space station is mimic elements of Earth’s natural water cycle to reclaim water from the air. And when it comes to our urine on the ISS, today’s coffee is tomorrow’s coffee!”

According to NASA, the UWMS was mainly designed around astronaut feedback relating to comfort and ease of use. It’s 65% smaller and 40% lighter than the old current space station toilet, and features improved integration with the ISS water system that aids in recycling more urine, which the astronauts do drink after it is filtered and processed.

How Toilets  Work In Space

With no gravity to rely on, space toilets use air flow to pull urine and feces away from the body and into the proper receptacles. A new feature of the UWMS is the automatic start of air flow when the toilet lid is lifted, which also helps with odor control.

By popular (astronaut) demand, it also includes a more ergonomic design requiring less clean-up and maintenance time, with corrosion-resistant, durable parts to reduce the likelihood of maintenance outside of the set schedule. Less time spent on plumbing means more time for the crew to spend on science and other high-priority exploration focused tasks.

The Importance of Efficient Plumbing for Future Space Missions

As NASA prepares to return humans to the Moon and looks forward to the first human mission to Mars, life support systems like the UWMS will play a major role in keeping astronauts healthy and safe as they live and work farther from Earth than ever before.

Creating plumbing systems that operate at maximum efficiency is important for roundtrip missions to Mars, for example, which take about two years. The long journey means no opportunities to top off the water supply, which is why NASA’s goal is to reach 98% recycling rates before the first human missions aboard a proposed Mars transport vehicle.

The next time you spot the ISS moving through in the night sky, remember that the work you do is just as important in space as it is here on Earth.